In January, I chaperoned a field trip to Boston’s Museum of Fine Arts. We took in the larger-than-life portrait of George Washington and troops crossing the Delaware. We inspected the replica of a Colonial American bedroom. We considered the craftsmanship of Paul Revere’s silver.

…and then we stumbled upon this empty picture frame. 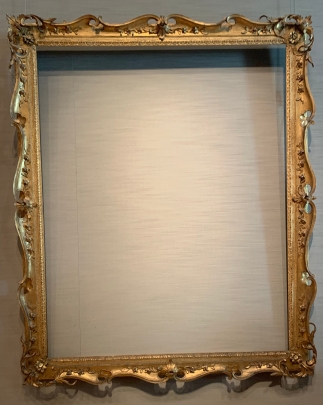 “Was the picture stolen?” One fifth grader asked.

We took a step closer. It did not look as if anything had been ripped out of place. It looked heavy, and ornate, with undulating curves that were their own masterpiece.  The shadows felt like artistic echoes rather than emptiness.

Students squinted, and took another step closer. While most of the ten year olds focused on the actual frame, I took note of the plaque next to it, and was pleasantly surprised by what I read.

The frame was intended to showcase all of the people whose stories aren’t told in the Revolutionary America wing, which mainly featured older, white men. Founding Father types. But there were so many people who contributed to the war, the culture, and the community, whose faces were never seen here.

Colonial portraits were more aspirational than documentary — painters wanted to show off their skills rendering the shimmer of a satin dress or the softness of a curl of hair, and sitters wanted to appear confident, worldly, and beautifully dressed, regardless of how they actually looked. Especially for wealthy white elites, portraits marked significant events like marriages, solidified relationships between families, and projected their ideas of prosperity and power. This empty picture frame represents the people in the Revolutionary period who were never painted — or heroized — in oil on canvas.

Perhaps the people missing from this picture could not afford to commission a portrait, or perhaps they conveyed their values through different art forms. Should we see here the face of Crispus Attucks, the sailor of African and Native Indian descent who became the first Patriot to die in the war? Or perhaps Phillis Wheatley, the young West African woman enslaved in Boston who became an internationally acclaimed poet, should be shown at her writing desk? There is no portrait of Sachem Solomon Uhhaunaunaunmut (“King Solomon”) who led Stockbridge Mohican soldiers against British forces in early Revolutionary battles. Who else is missing? Elizabeth Freeman, whose lawsuit for freedom let the Massachusetts Supreme Judicial Court to outlaw slavery in 1781? Who do you want to see?

This blindspot — who is missing? — happens not just in art galleries, but in every possible facet of our life. There are groups of people in the United States — black, indigenous, latinx, etc. — who suffer great erasure from the documented narrative.

This also happens in teaching, and on this website. Graphs are beautiful in that they have the potential, in a single image, to convey a story. The slow reveals draw the story to the surface. These stories cover ideas about our unjust prison system, and the pay gap (by gender and educational attainment), and the environmental impact of the food we waste. I have featured many graphs about race in North America, and issues related to our changing word, but so many stories are missing.

The most challenging part of identifying blindspots is that we often need help to figure out what we cannot see. In the case of SlowRevealGraphs.com, there are several blind spots that I can see — quite easily! — because they involve me or my family members. Which begs the question: if I’m missing stories that have to do with my family’s experience, what stories am I missing without so much as a clue?

My own husband is an immigrant. He arrived in the United States in his mid-20s, from Algeria (North Africa). He is the only one in his immediate family, and one of only three people in his extraordinarily large extended family, to live outside of Algeria. There are so many stories to tell about the immigrant experience, and legislation around immigration, through graphs. This story is largely untold here. I am proud to have added Lee Melvin Peralta’s contribution recently, about the maximum number of refugees allowed in the United States.

What about other countries and perspectives?

I have lived in the United States for almost all of my life, and I am increasingly aware of how American my perspective is. So many of these graphs center the American experience.

I felt almost embarrassed about this when I saw that people like the utterly amazing Idil A. ‘liked’ my tweet discussing the latest additions to the slow reveal graph collection. Idil lives in Canada. Look at the three graphs I cited — refugees in the US, Americans and nutritionists, and hurricane season (in the Southeastern US). Everything was about America! I would like to diversify the perspectives in the data collection. If you are interested in helping, you can always submit a graph to me (jennifer_laib at psbma dot org ) or create your own slow reveal and submit that!

What about the widespread violence and bias against LGBTQ+ people?

Someone who is incredibly dear to my heart came out as nonbinary last year. I was already aware of the discrimination queer people face, but now it’s so much more personal to me, even though I am cisgender/heterosexual. I have been on the hunt for some effective graphs that tell this story for a while, and I look forward to creating some graphs. You are always welcome to contribute, too, of course.

What about different family structures?

One parent? Two parents? More? Raised by a grandparent? Raised in foster care? The United States has favored the nuclear family for the last few decades, so how is that impacting us? My mother died when I was young, which left my ‘single’ father to raise three children in the wake of a shattering loss. I started to create a slow reveal from a Mona Chalabi graph about the percentage of people with dead parents, by age. It hasn’t been added to the website officially just yet, for various reasons.

What about the economy?

What about student loan debt?

There are millions upon millions of other stories that are missing from this site. Do you have a graph you think would make a good slow reveal? Do you have a slow reveal you’ve already made about a missing story? If you are up for sharing, I would love to honor more.

The thing about blindspots is that I cannot even see everything I don’t know, and all of the stories that are absent.